skip to main | skip to sidebar

WHAT MAKES A GREAT BUILDING CONTRACTOR? 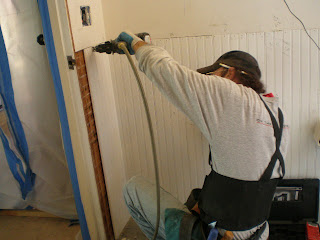 What makes a great building and remodeling contractor?  Steve's got it all (and I do mean to brag!):
The photo above shows Steve installing wainscotting along a wall for a bathroom remodel.  It came out beautifully because he's a perfectionist.
Posted by On The Beam Remodeling at 12:11 PM 2 comments 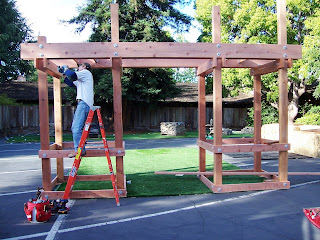 Despite the sprinkly, rainy weekend of June 4-5, the Sunset Magazine Weekend Celebration went underway and was a great success.  People streamed through the Sunset outdoors estate and tasted, sampled, touched and gazed their way through the myriad of vendors.

Today Steve is constructing an Entry Arbor to display at the Sunset Magazine Celebration Weekend in San Jose the weekend of June 4-5.  It was designed by Architect Steve Hinderberger.  We worked with Steve Hinderberger on a delightful kitchen remodel in Oakland and got along so well, we decided to stay in touch and help each other promote our associated services.

Steve H. will be "manning the booth" this weekend, and will have a display rack of literature for On The Beam Remodeling.   Business cards, photo postcards and magazines featuring our company will be available.  If you're down in San Jose, don't miss it.

Here are details of the event:  It's called "Celebration Weekend", takes place at Sunset Mag Headquarters, 80 Willow Road, Menlo Park, and tickets cost $16.  There are sections to the event, and our display will be at the Home And Garden Exhibit.  You can find more information at www.sunset.com; click on "Events".  It looks like it'll be a lot of fun.
Posted by On The Beam Remodeling at 10:50 AM 1 comments 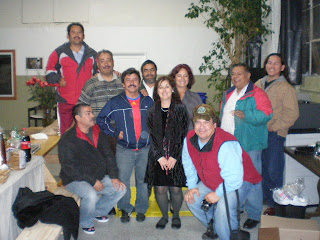 I have been teaching as well as running On The Beam Remodeling with Steve for the past year.  Here are my students with me (center) from the spring class 2011 of VESL for GETS:  Vocational English as a Second Language for the Green Energy Training Service.  As an experienced ESL teacher and remodeling expert, I am in the privileged position of preparing this group for certification as Building Performance Professionals in our community.  As a group we are working to provide employment, improve our fellow citizens' English skills, and make the world more energy efficient.

The organizations involved include Richmond Build through the City of Richmond, Rising Sun Corporation, a private building performance business, and English Center of Oakland.
Posted by On The Beam Remodeling at 4:35 PM 1 comments

Why Are They Fighting With Us?

In 1972 I took an elective class at UCSB (because I needed one to graduate) called "Islam Sects and Movements".    Professor Wadi taught us a brief history of Islam, from which emerged the split between the Sunnis and the Shi'ites.  We studied the Whirling Dervishes and the Sufis, forms of mystic Islam, which were much more fascinating than the bickering that went on between the two major divisions.

Why am I telling you this?  Much of what I learned in the class has stayed with me over the years and has helped me to put in a certain historical perspective the events leading up to 9/11 and continuing today.  Since this is my Blog, I want to use it to share it with my readers because perspective is empowering.

What is the difference between Sunni and Shi'ite Islam?  Two major sticking points:
It doesn't seem that these disagreements would give rise to a bloody reign of terror in the 1000's A.D., but in fact they did.  Perhaps they were just an excuse for a grab for power, which is often the source of conflict.

Next Blog will describe the bloody reign of terror in Islamic lands.  Stay tuned. 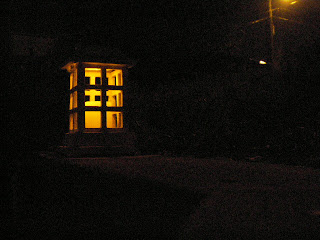 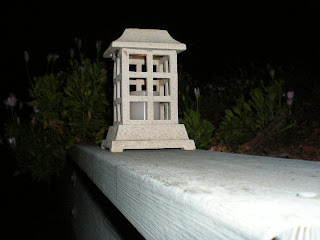 Steve and I have fallen in love.....with solar candle lanterns.  They are sturdy, attractive little columns with a flat-topped peak roof that contains a solar cell that is charged by exposure to the sun.  Inside the faux-concrete lantern is a "flickering" candle that sheds a surprising amount of illumination given how petite it is.  It takes an AA battery, which I just replaced in one of them after many years of use.  The other one still doesn't require a new battery.

I bought two at Costco about 12 years ago or so, and they're still shining away through the night.  I positioned one in our backyard garden and the other atop the retaining wall of our front walkway.  The ones at Costco cost me about $14 per lantern, and I just bought more through Amazon.com for around $16 each.

The best thing is their light is a warm yellow-orange hue like a candle, not that bluish-white glow of the typical outdoor solar light.  I will post a photo of my lovely candle lanterns here soon!  Check it out.
Posted by On The Beam Remodeling at 10:18 AM 1 comments

BACK TO THE FUTURE BATHROOM

We just started a kitchen remodel at a home in Wildcat Canyon.  That's the Berkeley hills for those of you who don't know that there's a canyon beyond Grizzly Peak Blvd., over the ridge.

Our very good client, Virginia, hired us to remodel her bathroom some years ago...could be six or seven by now.  I took some fine photos of the new bath, but back then I was still using a film camera and now I don't have any digitals of it to post here.  HOWEVER......!
The bathroom looks exactly like it did when we finished it in 2004 or 2005.  We can attribute this to two factors:
I will be taking digital photos of her new kitchen, and while I'm at it, I'll take a few of the remodeled bathroom that we completed years ago.  Look for those photos here, SOON!
Posted by On The Beam Remodeling at 1:43 PM 0 comments

On The Beam Remodeling
Richmond, CA, United States
www.onthebeamremodeling.com is our website. We are a custom high-quality residential remodeling company that truly cares for your home, your comfort, your time and budget. We're Green Building Certified, eco-friendly and open to energy-saving strategies. We offer Design and Build, a seamless process that assures the best results. Any room in your house, any window or door, whatever deck, entryway or addition, WE CAN DESIGN, REPLACE, REMODEL AND BUILD! Call us at 510-412-9964 for a FREE ESTIMATE by Steve Schliff, General Contractor and Owner.